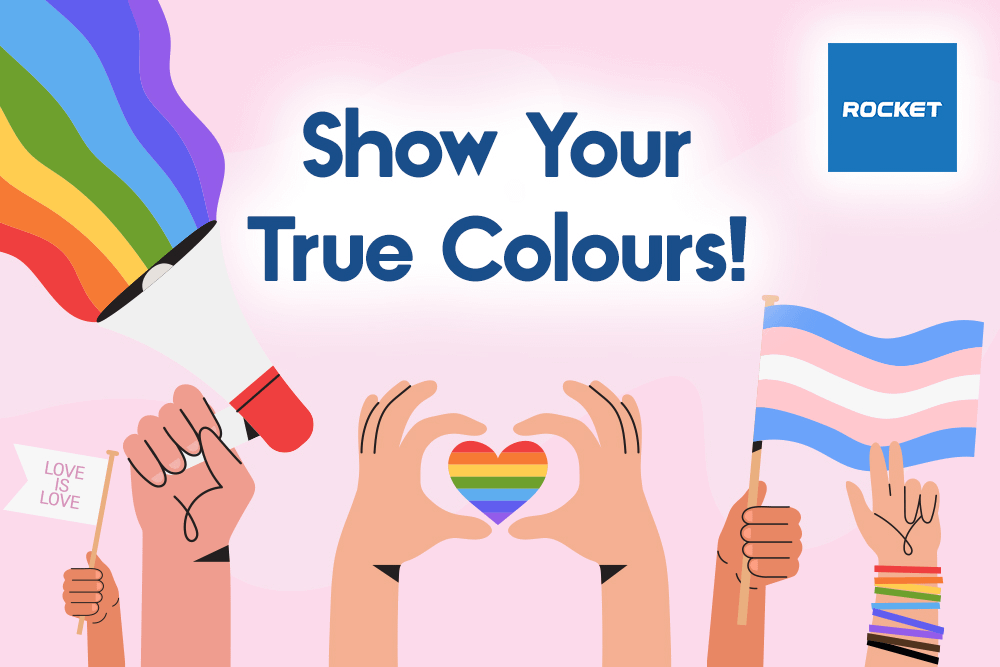 It’s Pride month! After over two years of having to delay or cancel events, we’re taking every opportunity to celebrate with everyone. Here at Rocket we feature our favourite colourful campaigns that showcase the community’s incredible diversity through multiple marketing means.

The iconic footwear brand has released a reimagined version of its 1461 shoes and created rainbow-infused socks. Designs feature sole to sole monochrome white with rainbow flash detail. The 1461 For Pride leather shoes and For Pride vertical logo socks complete the look with colourful lettering

On Instagram, the brand is realising behind the scenes episodes of their Pride Generations photoshoot. Collaborating with members of the community who combine visual performance and photography to share their journey to self-discovery.

As part of their campaign, Dr. Martens pledges to donate £217,000 to LGBTQIA+ charities across the globe. The brand also asks customers to share and showcase their shoes using the hashtag #DMSAKWAYSPROUD across social media.

Publishing house Penguin Radom House has launched its first-ever zine, ‘Pride in Your Words’. Packed with 60-pages full of interviews, passages and even colouring pages from queer authors’ works that were published in 2022.

A limited run of 1,000 printed copies and a free digital edition of the zine offers accessibility to anyone to read the showcase from the community’s contributors. Typography, illustration, graphic design and in depth interviews from people within the community fulfil the zine’s unique colourful layout stands out loud and proud. The general-interest publisher unveiled billboards in cities around the USA to promote the zine.

The dated law was made policy during the AIDS crisis over 40 years ago. With citizens criticising and calling for repeal amid a nationwide blood shortage, the dating app supports the removal of the controversial law.

Tinder and Human Rights Campaign (HRC) are encouraging app users to swipe right on an “All Types” pride card. They then take part in the Advance Study which aims to put in place a more inclusive policy.

Singing sensation Sir Elton John will be seen at numerous Pride march routes throughout the summer, transforming into an LGBT-QR Code!

Clear Channel and Ogilvy UK’s Proud network has teamed up with The Elton John Aids Foundation to launch  LGBT-QR Codes aimed at creating a fundraising platform that will be released globally during Pride 2022. An image of the iconic singing sensation has been made into an  LGBT-QR code. Images will be featured via thousands of Digital Out-Of-Home (DOOH) screens, which will be turned into donation touchpoints to raise money for the charity.

Originally starting in 2019, Hulu’s campaign ‘Pride Never Stops’ is planning on pushing its platforms capabilities by offering livestreamed Pride parades for the first time ever.

With events having been cancelled due to the pandemic, Hulu encourages watchers to join in all the celebrations virtually. Alongside livestreamed content, Hulu is also airing multiple popular queer films and series in hopes of spreading LGBTQIA+ stories/entertainment.

Moreover, the book is selling for $19.33; a nod the year that the United States’ first know queer bar, Café Lafitte in New Orleans, opened.

It’s the latest show of support from Miller’s Open & Proud program. The program supports the LGBTQ+  community in partnering with the Equality Federation, which will also benefit from proceeds from the book sales.

AKQA partners with non-profit organisation West Pride to raise awareness to the displacing of LGBTQ+ asylum seekers in Sweden.

“Ambassadors of Pride” focuses on the stories of six refugees who had to contend with the Swedish asylum process. Asylum seekers are also receiving titles such as Honorary Members of West Pride and Ambassadors of Pride alongside certificates to help improve their chances of being accepted into the country’s LGBTQ+ community.

Campaign elements include OOH, social, and digital components created by AKQA throughout Sweden.

As your local Northamptonshire-based marketing agency, our services provide you with national and global reach as proud supporters of all businesses big and small.
Playing our part in keeping Northampton, and our clients everywhere running. Contact us today on 01604 250 900 to boost your marketing today.